Many of you are learning French as adults. And it can be challenging.

So, the internet is overflowing with reassuring advise to sugar-coat the fact that learning French as an adult is going to be hard work.

Let’s stop the BS, shall we? Let’s see why it’s most unlikely an adult is going to learn French as a French child does.

And also what valuable lessons we could learn from the way children learn French.

Its’ pure survival instinct. Children want to speak. They long to communicate: it’s the next logical step in their development, and all things considered, communicating efficiently in any given society is a question of survival.

So their motivation is extremely strong.

As an English speaker, I doubt your motivation is as strong!

Have you ever had a conversation with a toddler? You know it’s usually quite a challenge…

But as a society, we are so willing to encourage children to develop their speaking abilities that we all make a huge effort and bend over backwards to follow what the little one is trying to say.

Most of the time, we guess half of it.

Our daughter Leyla’s first word was “papillon” (butterfly). Well, after “Maman” et “Papa”. Now, it sounded nothing like “papillon”. It sounded like “papila”. But we know what she meant, and we were so happy to start communicating verbally with her. And so proud she picked such a long word!

If the French made even half these efforts to try to understand what you say when you speak to them (and didn’t immediately switch to English) it would make your French learning experience so much nicer! 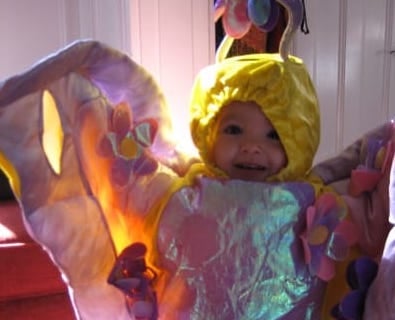 3 – Children Have An Amazing Memory

I don’t think I need to develop this point much. It’s a fact that, for most of us, as we age, our memory gets weaker. Most adults just can’t learn like a child and be as efficient as children at memorizing vocabulary. I actually wrote an article about learning French as a senior.

4 – A French Child Is In Constant Immersion

Not only do they live among their target language, but people are constantly speaking to them. Again, it’s a question of instinct.

I remember singing lullabies to Leyla in the womb. I never sang before, and never have since. When I was pregnant, I sang non-stop!

A doctor told me it was actually an instinct to develop your child’s language ability and connect him/her to your voice. Amazing, isn’t it?

So, all these are reasons why you shouldn’t aim at learning like a French child if you are past that stage.

But what do children do that can inspire us to become better French learners?

Small children can’t learn from grammar books. So they deduct the rules from the context: well, they don’t really deduct the rule… their brain recognizes patterns and repeats them.

That’s why a 10 years old may sometimes throw in a subjunctive. They don’t know what the French subjunctive is. They just repeat a construction they’ve heard and memorized.

I often tell my students to do the same: understanding French grammar is actually a huge help for most adults.

But I’ve also met many students who seem to be “allergic” to grammar. Even when it’s explained really clearly. For them, learning in context is the key.

I suggest you checkout my French audio method “A Moi Paris”. All the method revolves around an ongoing, level adapted story. You’ll learn the French rules, I’ll explain and compare them to English, and then you’ll learn within the context of a real-life like story.

6 – Learning French Like a Child = Learn To Speak First

That’s the big misconception about the way French is taught…

As a student learning French as a second language, chances are that you learned only “written” French. Even when you learned to speak, you were learning formal French, reading French literature or unrealistic dialogues…

“The spoken French taught in American classrooms is a fiction, based on ideas about how people should speak, not on how they do speak”
Waugh & Fonseca-Greber – University of Arizona

Nothing prepared you for the real French language like everybody speaks it in France nowadays. And that’s why you don’t understand the French when they speak.

So if you want to learn French to actually communicate, it’s essential you train on understanding modern spoken French and engage regularly in French conversation. I recommend taking regular French lessons by Skype, or doing a French residential immersion at a teacher’s house.

7 – Learn French Like A Child = Repeat What You Hear

Because of the way French is taught abroad, many students learn only from books. And therefore never develop an ear for the language or a proper pronunciation.

If you are familiar with my audio method, you know my motto is: “repetition is the key”.

When Leyla was little, she’d watch the same Disney movie over, and over, and over again. Each time, she guessed and memorized more words. When she was three, she said “c’est le serpent Ka : il kidnappe Mowgli et il l’hypnotise !”… not a typical three years old sentence… she must have watched that movie over a hundred times. Seriously.

That’s a great lesson kids can teach us: the best way to learn a language to communicate is to learn with by hearing it.

Of course, be careful to select an audio method which focusses on the French you want to use, and a teacher who has an accent and voice you like.

Another huge difference between kids and adults is that kids are not self-conscious. They don’t care if they make mistakes. And why should they? Nobody is mocking them… Everybody is pure encouragement!

Many adults experience a fear of speaking French. It’s not easy to accept to be vulnerable, to be unable to represent your “self” – your humor, your wit, your culture – like you do in your own language. The French accent sounds strange, it’s unfamiliar. The whole process is actually quite uncomfortable. And as adults, we don’t like that at all.

So let’s learn from our young ones. Stop caring! Nobody is asking you to speak French like the French. It’s OK to be you, to have your own cute accent, to make mistakes, to even sound silly at times.

I recently started making everyday spoken French videos. Oh my… the process was brutal. I hated my image on screen, the way my lips twist in all directions… At first, I couldn’t remember what I wanted to say, I totally froze. I was so terrified I gave up the project for a while.

But I really wanted to provide students with a tool showing them you can speak about everything using simple French, and make sense.

There is definitely a relation to be made between the fear of speaking in front of a camera and the fear you experience speaking French. So it made me closer to you.

There will always be someone around you who learned faster than you. Or another student who naturally has this amazing French accent. There will always be an obnoxious person who criticizes your French, or corrects you – even when you didn’t ask to be corrected! But that’s OK.

It’s OK to be less than perfect. Don’t give up, study regularly with a structured method, do your best. You only have to answer to yourself.