Previous postLearn How to Speak English Fluently!
Melania Appears To Need Translation Headset To Understand Macron Even Though She’s Been Said To Speak French FluentlyNext post

“Life is either a daring adventure or nothing at all.” – Helen Keller

I didn’t truly know the meaning of adventure until I began traveling. I grew up in a small, rural town in South Carolina. The farthest I’d traveled as a child was to Virginia Beach, VA and Orlando, FL. My first flight was at age 18 to Houston, TX and my first international trip was to Freeport, Bahamas at age 21. Then about a decade later, I took a two-week journey to Beijing and Shanghai, China with my MBA cohort in graduate school. That trip changed my life. The idea of travel to me was no longer the thought of expensive flights I could not afford, all-inclusive resorts and the perfectly posed Instagram photo. It was about the experience. A daring adventure. A privilege that allowed one to immerse themselves in another person’s language, culture, life and world. To date, I’ve travelled to 18 different countries, but my last trip to Costa Rica gave me the opportunity to completely submerge myself in both the beautiful coast and culture of Manuel Antonio. 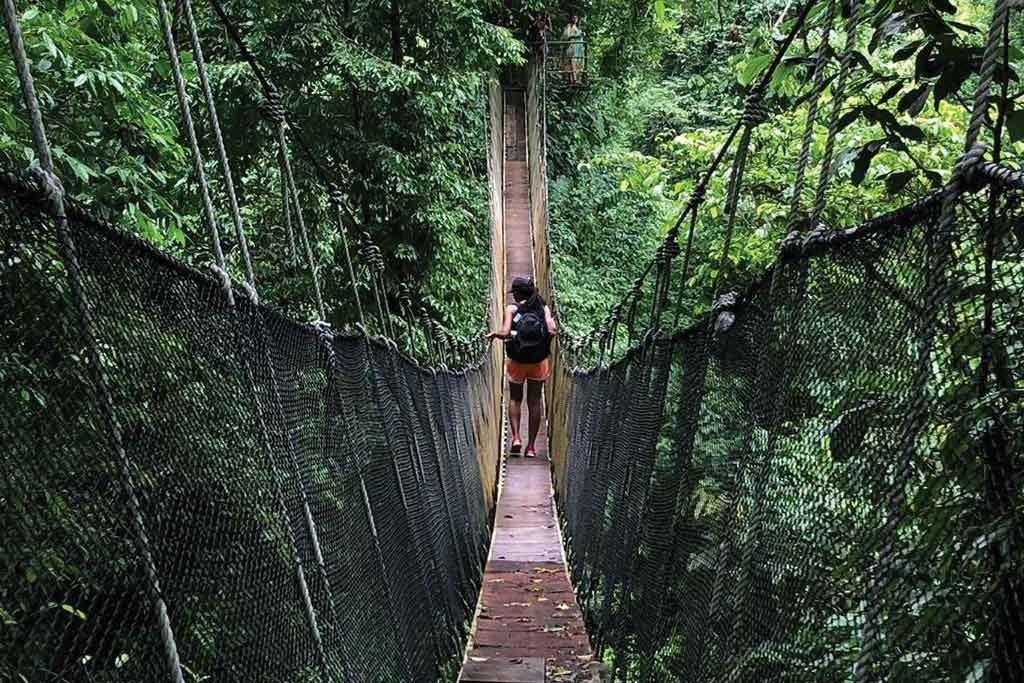 Most high schools in the United States make it a requirement for students to learn a foreign language. Mine was no exception. I took three years of Spanish, most of which was just memorized and later forgotten. However, there’s a huge Spanish speaking population in Texas where I live, so it made sense to study it. In addition, I know that being bilingual makes one more marketable in the workforce. It’s a valuable strength to be able to communicate in more than one language. It can help to connect you to more people, learn about new places, and maybe even help someone in need.

However, like most high school students, I went to class, did what needed to be done to pass, and it never really stuck. Outside of the classroom, I didn’t actually practice. I simply went about my life, as usual, using only English everywhere I went. When I learned about Maximo Nivel’s Spanish Immersion program, I decided to do it over – the right way.

From Monday to Friday, I participated in small group courses for two hours per day, and when I say small – I mean small. My first week only consisted of myself and another student, my new friend Vishali; the second week, there was another named Lisa. The small class size allowed me to get the instructor’s full attention when needed, and the students were able to comfortably learn from one another. 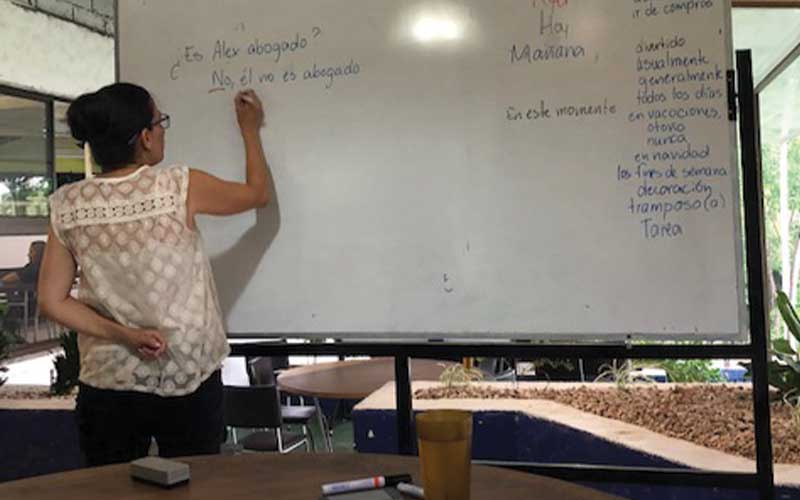 I prepared for my trip by studying a bit of the most common Spanish idioms on my own. I even purchased a Spanish/English dictionary and downloaded the Google translate app. I chose to stay with a host family to get the full Spanish immersion experience, and I was so grateful to have been able to share the house with 2 other female Maximo participants. These girls really helped me to adjust to the new environment, and to communicate more effectively with our wonderful host mom.

As the days wore on, I deleted the Google translate app because I felt that it took away from feeling present. In fact, it made me feel even more obligated to learn the language fully through Spanish immersion; I wanted to be able to have a conversation with my host family as a sign of respect for their culture. There was a level of expectation I felt learning Spanish in Costa Rica because I knew it would bring me closer to being part of the community.

At one point during my stay – not having yet advanced from beginner to fluent in my first week – I hurt my back after an extreme weekend of excursions and somehow I was able to successfully communicate this with my host mom. Here’s the story:

My first (and only) Saturday in Manuel Antonio, I decided to visit Nauyaca waterfalls. It’s a stunning site with clear waters making their way down the tiered rocks, but you won’t get there without working for it. I booked the excursion directly with Maximo Nivel’s travel partners, so it was an easy and convenient pick-up. However, you will need to hike uphill, downhill, through muddy patches, and hop rocks over small streams for about 1.5 hours before finally arriving at this amazing destination. It’s well worth the exhaustion, but probably not a good idea to group so many activities in one weekend as I did. 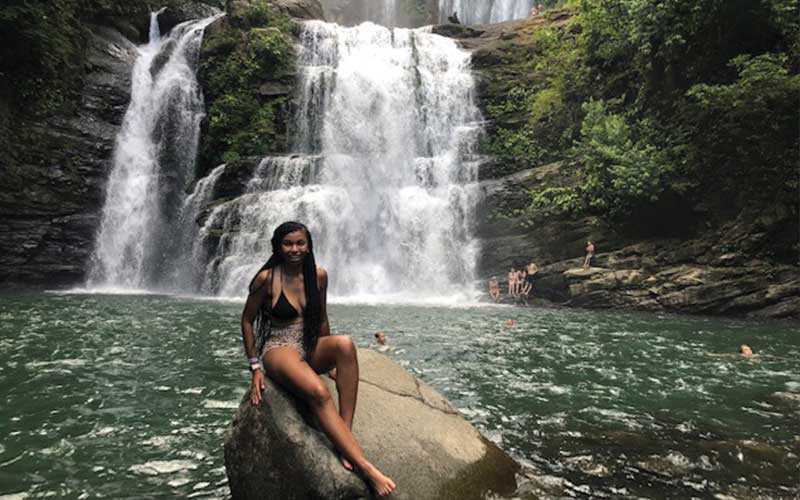 That afternoon, and immediately after that extensive trek, I visited Rainmaker Park for some more hiking (though a bit less excruciating), some hanging bridge fun, and more waterfalls. It was an incredible, yet exhausting day. I made it back to the house, only to wake up bright and early on Sunday to visit the famous Manuel Antonio National Park.

By far, this park is the least intense hike. The roads are paved over smoothly, and there aren’t any intense inclines. You traverse through the rainforest which houses a variety of monkeys, birds, and coatis and end at one of the most beautiful beaches in the world. But the amount of peace and happiness this journey brought me didn’t prevent the aches and pains that came with a weekend full of strenuous activity.

It turns out I had pulled a muscle during my hike. My host mom knew I was in pain and was genuinely concerned about my well-being. With a bit of language and a lot of compassion, she provided a heating pad, ice, and peppermint oil to treat it. She even persuaded me to visit a doctor at the local clinic which was very affordable!

Although I had insurance, I didn’t need to use it. The consultation with the doctor and prescriptions for muscle relaxers and anti-inflammatory meds came out to $100. During this time, my host mom was very attentive and made sure I was cared for. I wish I was able to communicate better with her during my time but I had a wonderful relationship with her anyway. Staying with a host family and being able to communicate the little that I could while learning Spanish in Costa Rica made it a truly memorable experience. It made me feel empowered and it was liberating being in a foreign place while still feeling at home. 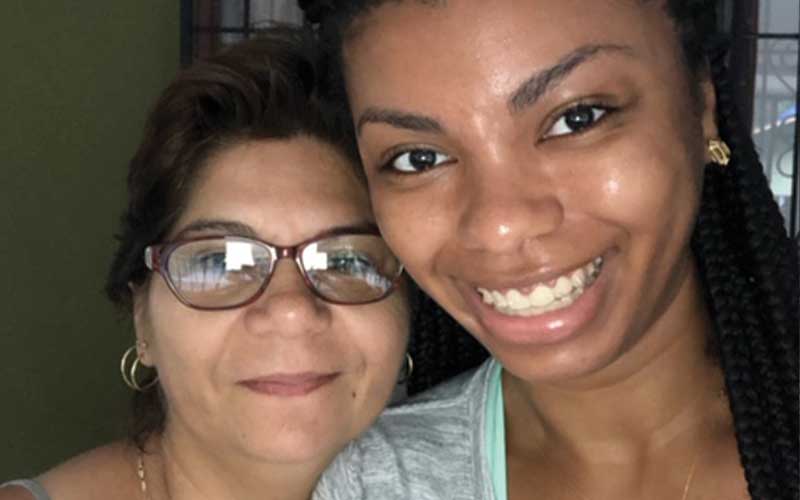 The campus itself provided so many opportunities to meet other amazing participants and locals, and encouraged me to continue speaking Spanish with everyone around. I attended the on-site cooking and salsa classes which were really fun and helped me to learn new dance moves and Costa Rican dishes, many of which contain one of my favorite foods: plantains.

I only spent 2 weeks learning Spanish in Costa Rica, but I learned so much from my experience. I hope to go back soon and do it all over again, but definitely for a longer period of time. I will absolutely choose to stay with the same host family again as we established a relationship that is dear to me. I was treated like part of the family, and there were many times I realized that although we couldn’t communicate exactly how I’d prefer, the connection was undeniable. 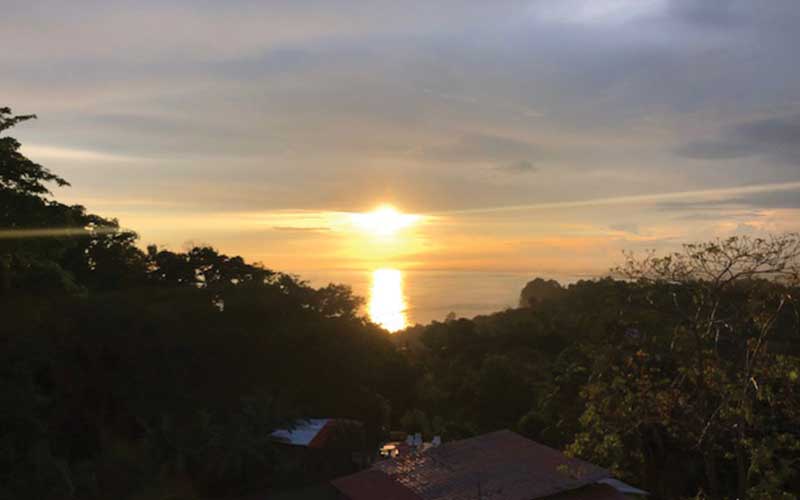 For those looking to learn Spanish in Costa Rica, Guatemala or Peru, I would absolutely recommend Maximo Nivel’s Spanish Immersion program. It’s a unique experience that allows you to get to know a country and culture through language, food, and dance. In only 2 weeks of learning Spanish in Costa Rica, I felt more confident in the language skills I developed than in the 3 years I took learning Spanish in high school. The option to stay with a host family is what really makes this program special. You feel like a real part of the community and get to live with people who truly care about you.

If you’re ready for a full immersion experience that will catapult your Spanish language skills, check out Maximo Nivel’s Spanish Immersion programs. Studying is only one small factor in advancing your language skills, the real success comes when you choose to live it.